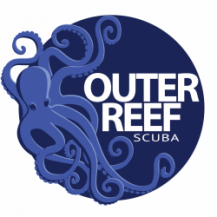 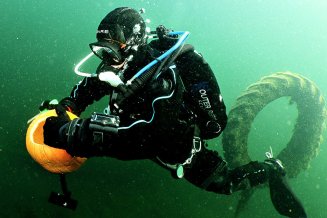 
Elizabeth started her scuba journey in 2006. After a snorkeling trip in Hawaii, she wasted no time in pursuing her Open Water Certification. The start of her journey was less than perfect, but out of that experience, she has learned that given the right amount of guidance and patience, anyone can enjoy our underwater world. She has a love for marine ecology, vibrant corals, warm waters, and days full of sunshine. Her favorite place to dive is anywhere there is water. She is not afraid of trying anything new and brings her passion with her wherever she goes.  She is dedicated to developing divers at every level from beginner to the pro level. 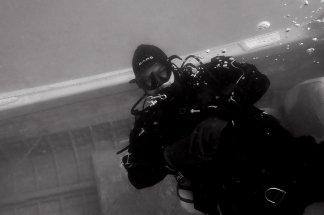 Ryan started his scuba adventures in a small lake in Southern Michigan. His uncle introduced him to diving in 1987. At 8 years old, his uncle put him on a regulator, and experience the underwater world for the first time. Ryan spent the next 7 years searching for propellers, outboard motors, anything else of value and just having fun in the underwater world of small freshwater lakes and springs. Fast forward 15 years, he found himself in the Caribbean and mesmerized by the fish life while snorkeling.  A few years later, he vacationed in Cozumel, this was the first time he had seen a pressure gauge, a computer, or even a BC. He was wondering where his J-valve pull was. Once he hit the ocean current and cruised that amazing reef, he was hooked back on the sport. Back in Indianapolis he immediately signed up for an Open Water Course. After 4 years of active diving and continuing education, he followed his passion into the pro world of scuba. He has dreamed of buying and starting a quarry for the past 8 years, so when the idea of opening a shop came up he jumped in feet first! 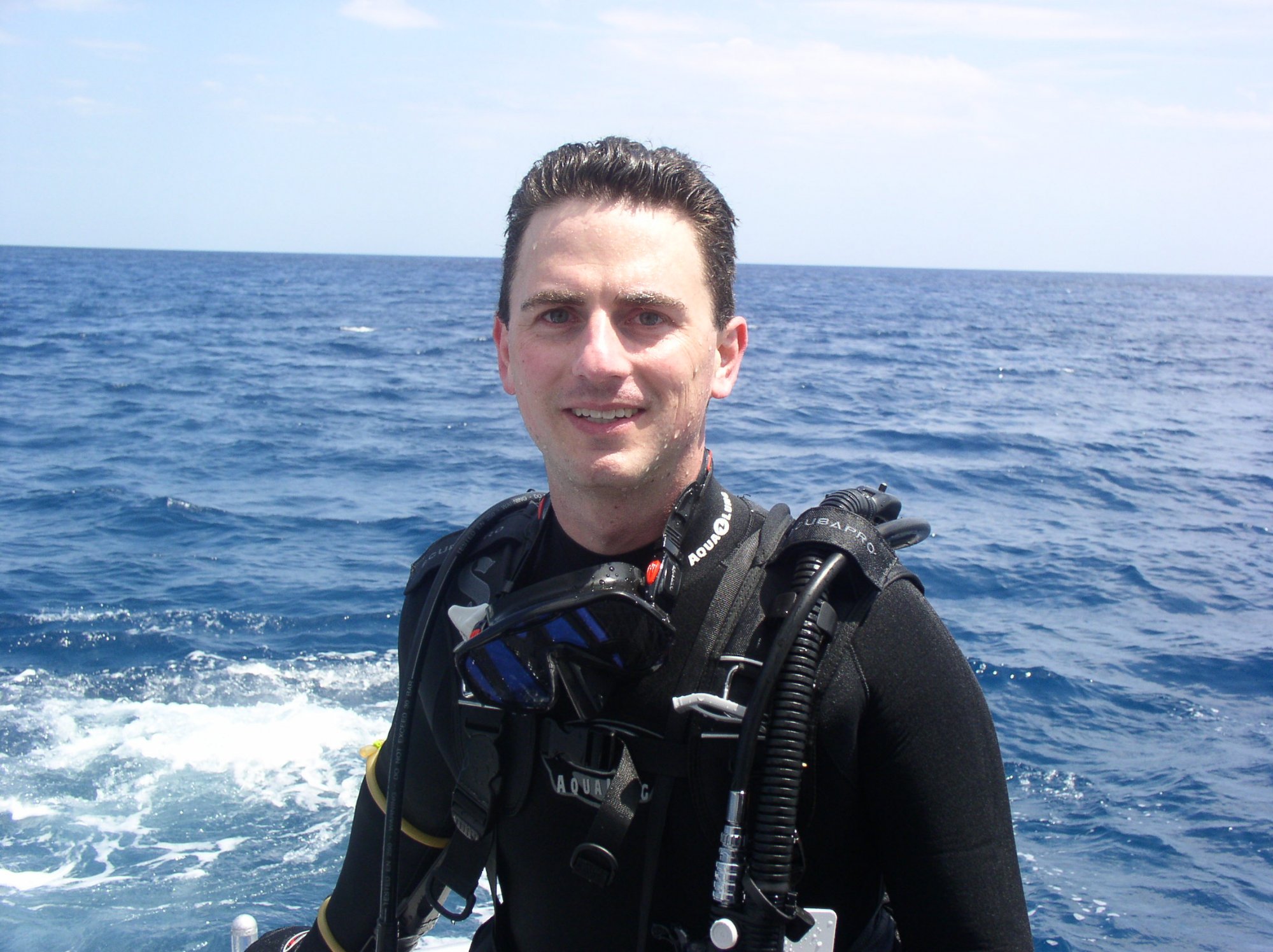 
Brent comes to us from the cold waters of Michigan.   He is a dry suit, quarry diver with almost 25 years of diving under his belt, it is no surprise that he is our Super Specialty Instructor!  Name it and chances are he can teach it and teach it well!

Brent's fascination of diving came from watching James Bond movies. Before becoming a diver, he read his open water manual twice and went through two discover scuba classes just to absorb all the information. In 1997, he took the giant stride to become a diver and has been hooked ever since.

In 2006, Brent became an instructor so he can ignite other's  passion of the underwater world.  What he love now about diving is sharing the scuba experience with others, whether they are new divers or well seasoned divers. 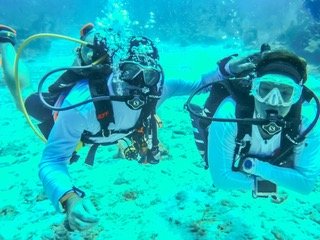 Joy really does live up to her name!  She brings her joyful personality to every class she teaches!!  She was a Special education teacher for 24 years and loved the challenge of adapting learning strategies to reach all students' potential.  After she retired from public school teaching she realized she could combine her passion for teaching and scuba. She became a scuba instructor and understands that all students do not learn at the same pace or have the same learning styles. Being an accomplished, confident, safe diver is the ultimate goal. 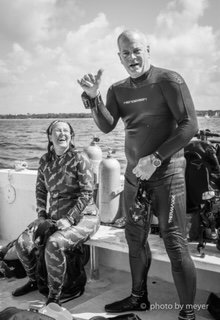 Jeff and Joy have been hooked on scuba diving “together" from the very beginning and love teaching this sport!  They trained together and now, teach together.  Nothing makes them happier than seeing the excitement in the eyes of a newly certified diver and sharing the wonders of the underwater world with all divers.

While Jeff prefers being salty but it really doesn’t matter as long as they are blowing bubbles.  Throughout our professional careers, they have taught new divers from 10 yrs. to 76 yrs of age.  Their focus on skill development, safety, and fun is unwavering.  Jeff and Joy's goal has always been to train divers to be confident in themselves and their skills when they step to the dive platform on the back of a boat, stand on a dock, or walk in from the shore for the first time. 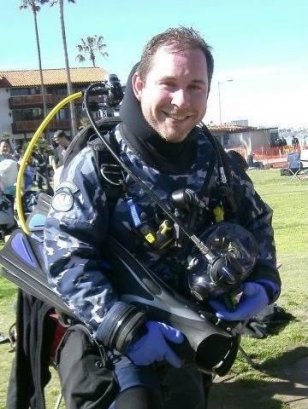 Michael Mino
Sea Star Gazer
PADI OWSI
Michael Mino has been a diver since 2006 and dive industry professional since 2007.  He first became a PADI Divemaster and then continued on with SDI for his instructor certification.  Michael has logged over 1000+ dives and has extensive experience in drysuit, cold water diving, and even some blackwater diving.

In addition to teaching with Outer Reef Scuba, he currently helps with the maintenance of the Indianapolis Zoo Marine Exhibits. He previously worked with Diving Unlimited International (DUI), a drysuit manufacturer, where he served as the event coordinator in their highly successful Demo Day Tour from 2008 -2013. These events held across the country, from Florida to Washington State and Massachusetts to California, gave him the opportunity to share his knowledge with those in local dive communities. 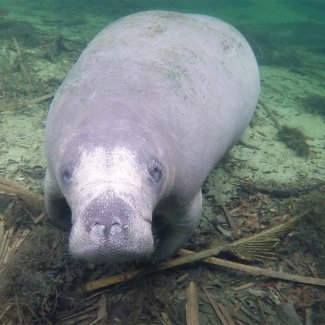 In the summer of 2001, Whiskers was welcomed to Save the Manatee Club’s Adopt-A-Manatee® program at Blue Spring State Park. Whiskers was first identified in November 1996 when he came to the park with his mother, Dana, who was also in the adoption program. During his first couple of months at the park, Dana would bring Whiskers in about every two weeks, and he stayed close by her. But soon Whiskers would take off to play up the run, and his mother would not be able to get him to leave when she was ready to go, causing her much agitation.

As he got older, Whiskers would continue to forge ahead up the run, with his mother doing her best to keep up with him. Whiskers has a playful and curious personality, and he came readily to the research canoe for “roll call” (manatee identification), even as a calf.  Whiskers readily posed for his first photos, and this allowed researchers to also snap pictures of Dana when she came to see what her mischievous son was doing. Unfortunately, Dana was killed by a boat strike near Palatka in 2012.

As Whiskers matured into an adult, that playful and curious personality stayed with him. He would still swim up the run with enthusiasm and was often one of the last manatees counted, as he was busy playing. In particular, Whiskers loves hanging around the swimming area of the spring and stirring up the clay in the area. This makes the water so cloudy that no one can identify the other manatees! As he has gotten older, Whiskers seems to be settling down somewhat and is showing more maturity. In addition to his usual stomping grounds in the upper part of the run, Whiskers has a new favorite spot: the front of the observation deck. “I often find him sleeping instead of storming around and getting into whatever is happening, as he did in the past,” says Wayne Hartley, Manatee Specialist for the Club.

Wayne often refers to Whiskers as a “Tail-End Charlie,” because Whiskers has been known to arrive at Blue Spring a month or so after the season begins. If the other manatees arrive at the beginning of November, Whiskers usually shows up near the end of November or at the beginning of December. He has been seen coming and going with manatee pals Margarito, Lenny, and Lucille. Never an attendance champion, Whiskers typically makes anywhere between 10 and 12 visits to Blue Spring each winter. With a tiny notch on his tail and a narrow white skeg cut scar on his left flank, Whiskers is often overlooked at roll call. Even now, with slightly larger notches created on the left side of his tail by boat injuries, he can often be overlooked.

Outer Reef Scuba is an Official Sponsor of Whiskers.  To learn more about Adoption Options, check out: Save The Manatee